The Problem With Blame 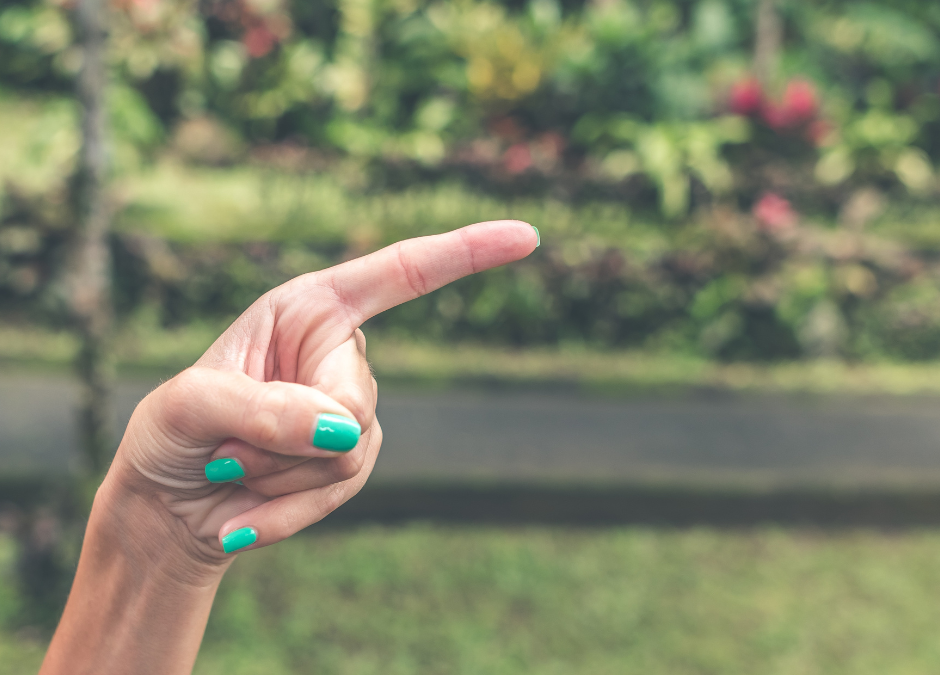 When were you last hurt by something someone said?  How often do you wish other people would behave differently so that you could feel better?  I’m going to guess it’s pretty often.

If you’re anything like the working moms I speak to and coach, you’ve probably got a list of the people you’d like to change in various ways:

The truth is that we all have a list of the people and things we wish were different so we could feel different.  But to be honest, blaming others is typically a copout – it’s easier to blame someone else than to take full responsibility for how you’re feeling.

We tend to blame others because we are naturally wired to use blame when we think something has gone wrong.  Our brain is hard-wired to seek answers outside of us which means more times than not, we’re going to easily blame someone else whether we’re consciously aware of it or not.

When your spouse doesn’t help with the kids, most women would agree that the spouse is to blame for why they are feeling frustrated or annoyed.  It makes sense – in your mind, your spouse was supposed to help, but they didn’t, and now you’re feeling upset.

The issue is that although blaming is natural, it’s also disempowering.  Just because we’re hard-wired to blame others doesn’t mean it’s effective or helpful.

So if you find yourself blaming a lot, stick around because I will help you see the problem with blame.  I promise you that dropping out of the blame game is much better for you now and in the long run.

This week I’m going to discuss the problem with blame and what to do instead.

The problem with blame

It may not seem relevant but think back to when you earned your first money; maybe it was babysitting or a small part-time job while in high school.  For me, I started babysitting when I was around 14 and also worked in the laundromat down the corner from my house, folding laundry and mowing the grass.

Can you remember how it felt to buy things with your own money?  That sense of empowerment?  While my girlfriends used their babysitting money to buy makeup or clothes, I always hated the heat, so I saved up to buy an air conditioner for my bedroom.  Literally, that was my first purchase once I saved enough money!

Maybe you can remember when you bought your first car – that sense of power and responsibility in making your own decisions.  The first car I purchased on my own was a silver Mustang, and I felt so grown up and mature, being responsible for making the car payments and taking care of the car.

One of the problems with blame is that it can become a vicious cycle.  We can get caught in a pattern of looking outside ourselves to figure out why we feel the way we do, why we’re taking the action we’ve taken, or why we have the results we have.

Blame is also tricky because it can often feel better to blame someone or something than to take ownership of why you are feeling angry or upset.  As I said before, our brain tricks us into believing that other things are the source of our problems because it’s hard-wired to blame.

Blaming others for how we feel is referred to as “Emotional childhood.”  It’s understandable that many of us are in emotional childhood because we often hear at an early age, “Aw, did Susie hurt your feelings?” or “You shouldn’t hurt his feelings.”  We’re taught to believe the things outside us are responsible for our feelings, so our knee-jerk response is to blame when we feel negative emotions.

The other problem with blame is that when we believe something outside of us, like someone else’s behavior, is the reason why we feel the way we do, we inevitably want them to change so that we can feel better.  Essentially, we’re saying, “You made me feel this way, so I need you to be or do something different so that I can feel better.”

If you’ve never looked at blame in that way, it might be time you did.  Blame is making someone or something responsible for how you feel, but it also gives all your power away.

In other words, I would feel better if this person or thing would change.  It then puts you in the position of needing things to be different so you can feel different.

As women, when we give away our power by blaming things outside ourselves for how we feel, we give up so much control.  We don’t look for ways that we can take responsibility for how we feel or where we can think differently about a situation in a way that empowers us.

Another problem with blame is that we don’t notice how often we do it.  When I work with my coaching clients, they’re shocked at how often they blame other people or circumstances for their problems.

It’s an interesting exercise to do – over the next week, notice how often you blame people and circumstances for how you feel.  Begin to pay attention to the knee-jerk blame response your brain offers you.  I promise you; it’s fascinating to see how often we blame.

The last problem I will share when it comes to blame is when you are on the receiving end.  Our brain interprets blame the same way it interprets a physical attack.

When we are blamed, our higher brain, the prefrontal cortex, will shut down and direct all our energy to defend ourselves.  The irony is that this then sabotages our ability to possibly solve the problem we are being blamed for.

As accountants, it’s especially important to understand the problem with blame because learning and problem-solving go out the window when blame is present; that part of your brain shuts down.   When you or others are blamed for something, productivity and efficiency decrease exponentially, damaging healthy accountability.

When blame is present, we also avoid responsibility.  Our brains shut down and go into survival mode, making it challenging to take action.

People will also tend to hide their mistakes rather than learn from them when their brain senses blame.  So now let’s talk about what you can do instead.

What you can do instead

As I shared, when you blame, you are essentially saying that someone or something else is responsible for how you feel, giving away all your power in the process.  Unfortunately, what often happens is that this can then become a pattern and lead to a victim mentality.

Getting caught up in victim mentality depletes your mental energy and diminishes your problem-solving capabilities.  It’s as if you’re putting the parking brake on and then wondering why you can’t drive.

As I suggested, you must first begin to pay attention to who, what, and how often you are blaming.  You need to have this awareness before you can do anything about it.

Honestly, I’ve done a lot of work myself on the topic of blame, and I shared the idea of “The Manual” in an earlier episode of this podcast, but let me explain it again here.  A Manual is a set of unwritten instructions that we have in our minds for how other people should behave or how things should be.

For example, my husband should help more with the kids, my children should clean up after themselves, and my mother shouldn’t complain that I don’t call enough.  We all have Manuals, so there’s nothing to be embarrassed about, but having an awareness of your Manuals is incredibly important.

I suggest you sit down for a few minutes and write down all the “shoulds” and “shouldn’ts” you have swirling around in your brain.  What should your friend say to you?  How should your husband help with the kids?  How should companies run their customer service departments?

The only problem with the Manual, or the set of instructions you have in your head for how everyone and everything should be, is that what you’re really saying is you would feel different if this person or thing were different.  Any time you have a “should” thought; you’ve got a Manual.

For example, if you believe your husband should help with the kids more often so that you can feel happy, you’ve now put the feeling of happiness on hold until he helps with the kids.  In essence, you’re saying he’s responsible for how you feel, so he has to comply, or you’ll be unhappy.

We do this all the time!  We have so many Manuals, especially for the people in our lives.  We have so many shoulds and shouldn’ts swirling around in our minds that it’s no wonder we can get caught up in the blame game.

The best thing you can do instead of blaming is to get clear about the connection between your shoulds and your feelings.  In other words, tell yourself the truth – I believe this person should behave this way so I can feel this way.

Once you get clear about the feeling you are looking for with your shoulds, leave them out of the equation by choosing an optional thought that makes you feel the way you want to feel.  The truth is that you’ve been blaming them for how you feel, but it’s only ever been your should or shouldn’t thoughts that have been creating your unwanted feeling.

For example, don’t give your ability to feel happy away by blaming your husband for how you feel; instead, choose an optional thought that creates the feeling of happiness on purpose.  Thoughts like, “I love our family,” “We’ll figure out what works best for us,” or “I can see all the other ways that he supports the family and me.”

It may not be easy to shift your thinking, but I promise you it’s worth the effort.  You can take so much of your personal power back by dropping your Manuals, taking full responsibility for how you feel, and giving up the blame game – you’ll feel so much better when you do.