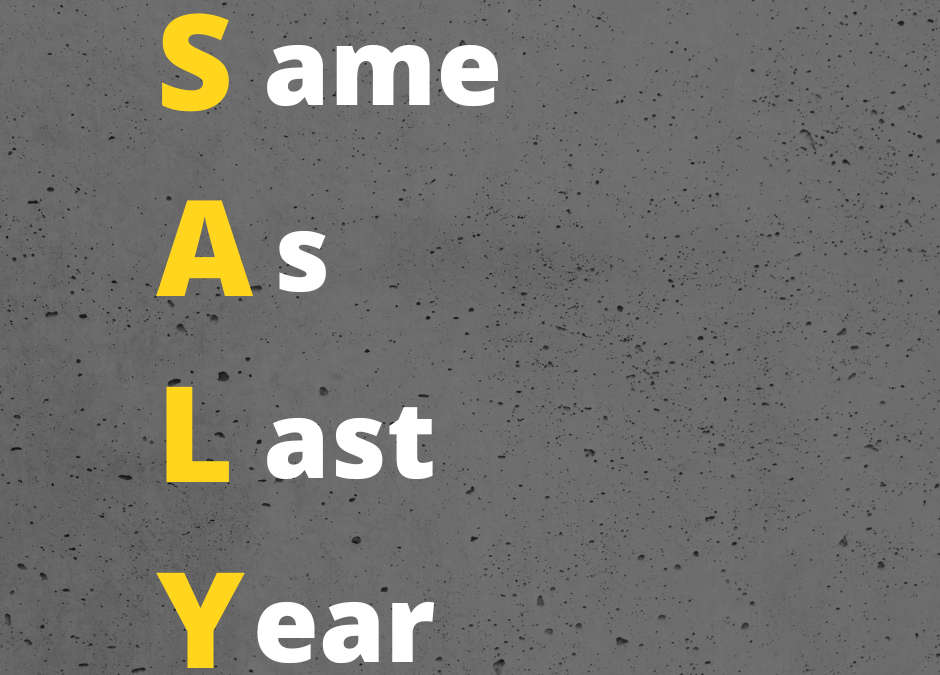 As accountants, we’re often tasked with compiling financial statements for our clients, using work paper references to tie back to the supporting documents.  For example, a bank account balance on the Balance Sheet will be referenced to the bank reconciliation and bank statement supporting that amount.

If you are the preparer and use a program like CCH Engagement, you’ll insert a work paper reference so that the reviewer can easily check that the amount is accurate, or you’ll hand write it, allowing the person reviewing the work to sign off.  Often, the balance of an item on the financials has been carried forward from a previous year, so you might put the acronym S.A.L.Y. next to the amount indicating “same as last year.”

This is particularly familiar to those of us in public accounting, but to some extent, most accountants are familiar with the term S.A.L.Y.  It’s an indicator that this item doesn’t necessarily need to be looked at because, at a minimum, it’s the same as the previous year, if not for numerous prior years.

For example, the cost basis of the common stock of an S Corporation would be marked as S.A.L.Y. after the year of inception forward unless there was some change.  With a simple compilation, there would be no need to show the backup for the stock basis since that’s typically in the permanent file and the current year’s work papers show more of the current year’s activity.

If you think about it, those S.A.L.Y. amounts also make our accounting work a little easier because it’s one less account that needs to be analyzed.  It takes less effort because nothing has changed, sometimes for years and years.

While that might be helpful in our accounting work, for many accountants, S.A.L.Y. is also how they live their lives.  Day after day, year after year, they are in a rinse and repeat cycle with their professional careers and their personal lives.

If you haven’t noticed, there are many very unhappy people in the accounting profession.  Much of it has to do with the past few years of the pandemic and all the pressure put on accountants to help individuals and corporations stay afloat.

But let’s be honest – there were many very unhappy people in the accounting profession WAY before the pandemic rocked our world.  While it’s nothing new, it’s also gotten much worse over the last few years.

The truth is that there are definitely things in the world that are not within our control, but thankfully, there is so much that is within our control.  If you’re tired of things being the same as last year, professionally or personally, keep listening.

This week I’m going to discuss why S.A.L.Y. can be a problem and what you can do instead.

As I said before, it’s understandable that using the reference S.A.L.Y. makes your work easier as an accountant, but when it comes to your career and your life, S.A.L.Y. can be a problem, especially if there are things you’re unhappy with.  While accountants are educated and indoctrinated into a particular method for doing our jobs, unfortunately, that way of doing our work can also bleed into how we do other things as well.

For example, if you’re continually feeling stressed and overwhelmed, if you’re working too many hours, if you’re settling for less than you deserve, or if you’re just unhappy with various things, whether that’s professionally or personally, you might want to take a look at how often the “same as last year’ attitude is contributing to the problem.  Even though you’ve been taught to use S.A.L.Y. for your accounting work doesn’t mean you should be using it anywhere else.

The problem is that most people, not just accountants, think their life will always be a certain way because of their circumstances.  For example, they believe they’ll always struggle with debt, be overweight, have relationship issues, or not be as happy or fulfilled as they’d like because that’s been their experience year after year.

They’ll set some goals or try to make some small improvements, but typically they won’t push themselves too far outside their comfort zone.  They’ll look to the past for evidence that they can improve or change something, often not finding what they believe they need.

The issue is that falling back on what worked last year limits your potential.  It’s also a mindset that encourages complacency and limits growth.

If you think about it, in public accounting especially, success can often be tied to conformity.  We are encouraged to “fit in” and do things the way they’ve always been done.

I’ll never forget when I worked for Deloitte back in the 1990s and got in trouble with HR because I started wearing pantsuits instead of skirt suits.  No joke!  I was called into the female HR director’s office and told that pantsuits were frowned upon.  Much to her chagrin, I kept wearing them, but it wasn’t easy for me to swim against the strong current of conformity.

Honestly, it’s amazing that I have lasted as long as I have in public accounting.  Over the years, I’ve had numerous people tell me that I’m not a “typical accountant,” but I take that as a compliment – I do excellent accounting work, but I’m very much my own person.

The truth is that I definitely pick and choose my battles in my professional and personal life, but I’ve also experienced how unhelpful the “same as last year” mentality can be.  We aren’t meant to live like we’re in the movie “Ground Hog Day,” as if every day and every situation is a continuous repeat of the day before.

Our purpose isn’t to live in a rinse and repeat cycle but to grow and evolve.  As humans, we are meant to have goals and dreams, to do what can sometimes seem impossible, and to push ourselves beyond what we’ve been capable of in the past, all because we have the gift of a human brain.

The biggest issue is that while our human brain has a prefrontal cortex, a higher part of the brain that is only present in humans and has the ability to think about and plan for the future, we also have a primitive part of our brain that desires sameness.  This lower part of our brain runs our lives more than 80% of the time, so it’s no wonder the “same as last year” attitude is so easy to succumb to – our lower brain is hard-wired for it.

Thankfully, we also have that prefrontal cortex, the higher part of the brain, to help us out.  Its superpower is the ability to choose what we want to think and believe, allowing us to believe in things we don’t yet have proof of.

While the primitive, lower brain would just like things to stay exactly as they are, even if that means you continue to have the problems you’re having, the prefrontal cortex says, “We can do better than that,” opening the door to possibilities.

What you can do instead

Since it’s so easy to fall into the S.A.L.Y. trap, especially as accountants, what is the solution?  I believe the antidote for the “same as last year” mindset is being open and curious.

As a profession, accountants are naturally risk-averse, but being curious and asking questions is the first step.  Questions like, “What is the purpose of this?” or “Why do we do it this way?” can override the natural tendency to gravitate towards sameness.

Your brain loves to answer questions, so you’re more likely to get an empowering answer when you ask it an empowering question.  For example, let’s say one of your bosses does something that annoys you; instead of asking, “Why does he have to behave like that?” you can ask, “I wonder what I could do to help him?” or simply, “I wonder what’s going on with him?”

The truth is that while it takes less effort just to accept the “same as last year” mentality, it also keeps you repeating the past.  If you never question how it could be different or why it is the way it is, you’ll never be open to what’s possible.

Think about when your children are young, and they’re full of curiosity.  What is the question that gets asked over and over again?  “But why?”  They want to know why for everything, especially when learning to own their independence.

Unfortunately, as we get older, we lose that sense of curiosity because we’re told to stop asking so many questions, and we’re told what to think instead.  But the best part about having a human brain is that we get to choose to think whatever we want, about anything we want, and we get to question it all.

How often do you just keep doing what’s always been done without questioning why?  What do you wish was different, but you are afraid of making a change?  What beliefs have you carried around for years, maybe even decades, that are ready to be challenged?  What is your “same as last year” thing?

For example, if you have an issue with procrastinating and always wait until the last minute to get things done, you get to start practicing the thought, “I don’t have to be someone who procrastinates.”  Once you begin practicing that thought, you’ll start to feel motivated.  Once you feel motivated, you’ll begin calendaring things ahead of time, stick to your calendar, and stop putting things off.  The result – you are someone who doesn’t wait until the last minute.

This was a simple example, but I promise you, the possibilities are endless.  When you stop applying the  “same as last year” mindset and stay open and curious, you’ll be amazed at how many things can change for the better.

Honestly, I wouldn’t be a Professional Certified Life Coach for Accountants, have written a book for accountants, or started this podcast if I didn’t question what else was possible.  My life was fine, having the “same as last year” mentality, but it is SO much better since I allowed myself to think and believe differently.

S.A.L.Y. isn’t just unhelpful; it’s a growth and opportunity stealer.  You’d be amazed at what’s on the other side of questioning S.A.L.Y.

So what will it be for you?  What has been “same as last year” in your life that you’d like to see change?  Be curious.  You never know what could be possible.